Learn more about us

Established in 2012, Interfaith Center for Northeast Florida, is a non-profit organization in Jacksonville FL, that aims to promote interfaith understanding through messages, events and celebrations. We develop and facilitate dialogue in order to enhance Northeast Florida’s awareness and appreciation of religious and non-religious diversity. Specialist at the University of North Florida, Interfaith Center

Kalilah Jamall is a graduate of the University of North Florida & Jacksonville native. At UNF she participated in the Better Together Leadership Development Program which honed her skills in social justice advocacy. She spent the following 5 years developing and coordinating dozens of programs for the university and Jacksonville community, including Distinguished Lecture Series with University President & Jacksonville Mayor John Delaney. As a trained Interfaith Youth Core alumni and ally, Kalilah has spoken at multiple President’s Interfaith and Community Service Campus Challenge Conferences, trained other interfaith professionals through the Interfaith Youth Core Alumni Network, and was awarded the Noor Inayat Khan Community Service Award for her efforts – the first of its kind in the country to recognize undergraduate organizers in interfaith communities. Upon graduation she went on to work for United States Senator Bill Nelson as a Congressional Staffer & Coordinator for Northeast Florida until 2019. She hopes to continue working in public service and community organizing. 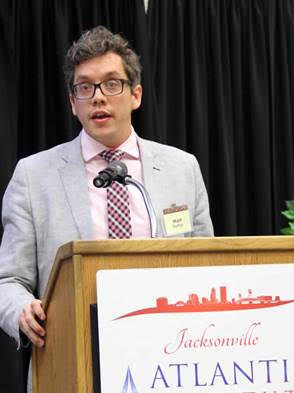 President of the Museum of Science & History of Jacksonville (MOSH)

Maria Hane serves as the President of the Museum of Science & History of Jacksonville (MOSH). In her eight year tenure at MOSH, she has increased the Museum’s operating budget by 46% led $2 million in capital improvements. She served as Deputy Director of Operations at the Cummer Museum of Art & Gardens and as the Director of Written Communications for Jacksonville Mayor John D. Delaney. She is a founding member of Cultural Fusion, a collaborative network of arts and cultural organizations in Jacksonville leveraging the power of the collective to lead change in the community. As well as on the Boards of the Florida Association of Museums, Nonprofit Center of Northeast Florida, Visit Jacksonville, Cultural Fusion and the Jacksonville Chamber Board of Governors. She graduated summa cum laude from the University of North Florida with a Bachelor’s of Art in Communications. She is an active member of Leadership Jacksonville Class of 2002 serving for three years on the Leadership Development Team and as Chair for Arts & Culture Day, and is a member of the Jacksonville Women’s Network. Naeema Haider was born and raised in Pakistan and moved the the USA at the age of 20, with her husband.  They lived in New York City and Mississippi before settling down in Jacksonville 15 years ago.  She studied psychology at UNF, is a homemeaker and mother of three children.  She volunteered with her children’s schools and the Islamic Center of North East Florida.  Her husband was previously a board member and she has been a great supporter of the Interfaith Center’s broader goals to bridge cultures to have an inclusive society in the greater Jacksonville area.

The idea of outreach and intercultural/Interfaith dialogue has been as old as Muslim Americans settling in Jacksonville. Atlantic Institute’s vision was first thought of by small group of Turkish teachers and businessmen who decided to help public education by applying for a contract to start a charter school in Duval county during 2006. Interfaith and Intercultural dialogue efforts were organized by volunteers and likeminded community members. These efforts were finding much praise and success. Programming examples were Dialogue Dinners, Art and Essay Contest- one year had more than 1000 entries by mid and high school students and attended by most of county/city dignitaries.
These wide range successes demanded a designated group of volunteers who would solely engage in interfaith and intercultural activities for the general population. Atlantic Institute was established in 2012 by many volunteers from Jacksonville later grouped with other south eastern states. By 2013 Atlantic Institute was operating in five states and more than 15 cities. Atlantic Institute in Jacksonville enjoyed many synergies from cooperating with other branches throughout the south east. In 2016 a group of volunteers in Jacksonville had a vision to take this branch of Atlantic Institute to different level of service to community by declaring an independent interfaith organization- Atlantic Institute of Jacksonville which has now been registered as an independent 501 (c) 3.
After many months of relooking at our core focus and identity the governing Board of Directors renamed the organization Interfaith Center of Northeast Florida. We believe our new name and focus better describes our future ambitions and role with the interfaith community.