The Sultan and the Saint (Jacksonville Premiere)

A big thank you to all involved in the Jacksonville premiere screening of The Sultan and The Saint. Over 420 people attend the screening yesterday at UNF Robinson Theatre. Guests were treated to an introduction from Director Alex Kronomer and some behind the scenes footage.  The film explores the life of Francis of Assisi and how he crossed enemy lines to gain an audience with Malik al-Kamil, the Sultan of Egypt. The two talked of war and peace and faith, which had profound effects on them both.

A special thanks to UNF President John Delaney for hosting the session and moderating the discussion panel of Alex Kronemer and UNF former students, Adah Shair, Mike Harris and current student Sarah Rosen, from UNF’s Interfaith Centre, discussing the need for better understanding of each others beliefs.

Alex Kronemer Director and the Writer of The Sultan and The Saint  joined Atlantic Institute members on Saturday April 8, 2017

The awards were followed by Jacksonville son, energetic and passionate keynote speaker Al Letson.   All of their words resonated with the audience and were relevant to our nation’s climate.  The diversity of our audience and the words from the podium motivate all of us to do more to inspire interfaith efforts.  Atlantic Institute Jacksonville are grateful for the evening’s sponsors and Dinner Committee for their support of the event. 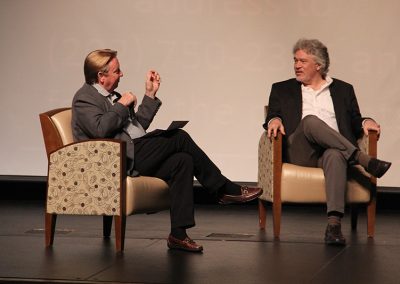 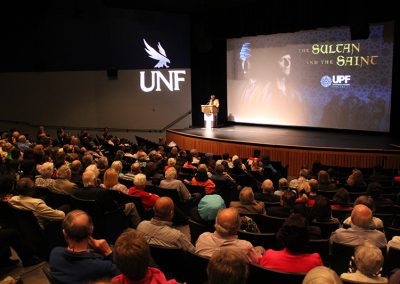 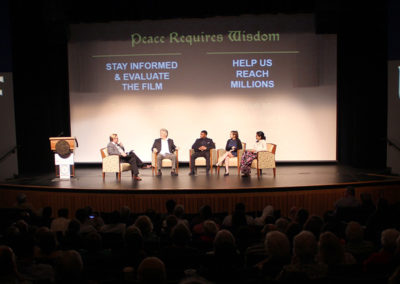 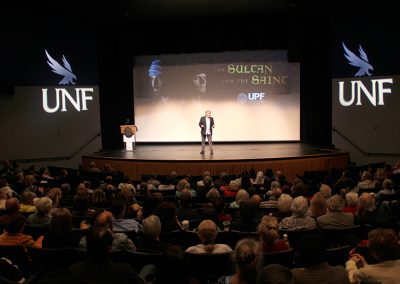 The Jacksonville Premiere of “The Sultan and The Saint” – screened at the Andrew A. Robinson Theater, University of North Florida

The movie tells one of the great, lost stories from history. Set in a past period of East-West conflict, it speaks with urgency to our present. Two men of faith, one a traveling Christian preacher, the other the ruler of a Muslim Empire, bucked a century of war, distrust, and insidious propaganda in a search for mutual respect and common ground. It is the story of Francis of Assisi and the Sultan of Egypt, and their meeting on a bloody battlefield during the period of Christian- Muslim conflict known as the Crusades.

During the Crusades, Saint Francis of Assisi risked his life by walking across enemy lines to meet the Sultan of Egypt, the Muslim ruler Al-Malik al-Kamil.  This remarkable encounter, and the commitment to peace of the two men behind it, sucked the venom out of the Crusades and changed the relationship between Muslims and Christians for the better.

The event was organized by UNF’s Interfaith Center in cooperation with The Atlantic Institute of Jacksonville.